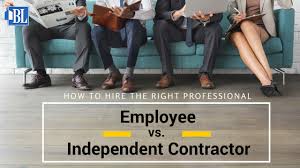 Debate over whether workers are employees or independent contractors

As a theoretical concept, internet has made it possible for many people to work without any boss and earning money by doing different things for people who require a service through the use of internet or an app based system.

This does give a lot of companies such as Uber, Lyft, DoorDash and Amazon among others a huge advantage over the employers who employ traditionally as these employers are required to pay a lot of taxes and fees which their modern counterparts are not required to. Recently a new law was passed by the California which made Uber and Lyft drivers as employees and not as independent contractors. This was also the maiden attempt at giving the gig-workers same benefits which the traditional employees receive like unemployment insurance and minimum wages.

A bill had been sent recently from the state of New Jersey to Uber which demanded it to pay an amount of $649 million of takes which had been unpaid from the year 2014 till the year 2018. The sum was for unemployment taxes and included a sum of over $100 million as interest. Uber has disputed these charges as the company says that they are going to challenge this preliminary but false determination as the drivers are independent contractors in New Jersey and also elsewhere.

Uber and other companies could see their labour cost rise by 20-30 % if the drivers are treated as employees by courts.