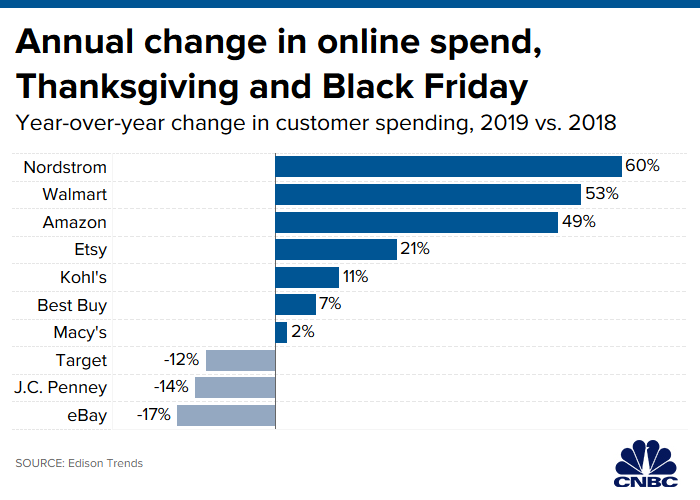 The Thanksgiving this year had come six days after the point at which it came last year as the retailers increased their advertisements and had given deeper discounts on the items like sporting goods, Appliances and toys as per the Adobe Analytics.

The vice president of Adobe, Jason Woosley has said that they got a selling season which had a shorter holiday. As per him, a compression effect was created due to this.

An amount of $11.6 billion has been spent by the consumers in two days. Friday also turned out to be the biggest day for mobile sales ever as an amount of $2.9 billion came out of smartphones alone. It was evident that people are now getting more and more comfortable with buying on small screens and purchasing online,.

With the continuation of cyber weekend, a day known as Small Business Saturday which was done to support the small retailers had pulled an amount of $470 million till the time of 9 am ET.

The retailers have been boosted by the fact that the shopping spree is not over yet and the Cyber Monday that is coming up might end up being a bigger event. Adobe has made an estimate that the figure of online sales is going to touch $9.4 billion. It has anticipated that the final few hours of the Cyber Monday is going to attract lots of sales from the people who would not want to miss out on a lot of deals.

Woosey has estimated that an amount of $29 billion is going to be spent online by the customers in the period of Thursday to Monday. This five day period is expected to form 20% of the estimated 143.8 billion of online sales as per Adobe through the holiday season.