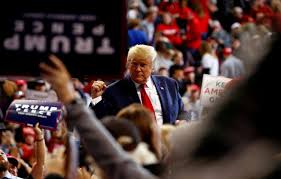 Stocks climb in early trade after positive comments by Trump

The stocks in the United States had climbed on Wednesday in early trade as the investors are happy about a report that USA and China are working still towards a trade deal which offset the fear of a possible delay that had been arisen by the remarks of the President of the United States, Donald Trump.

The stocks in Europe had climbed and had been looking at rebounding in the United States after it had been reported that in spite of the latest tensions, China and USA are progressing towards the trade deal.

The sources had said that this phase one deal is going to be completed prior to the date of 15th of December when another set of tariffs on Chinese products are going to come in to effect. The stocks had slumped on Tuesday after a press conference in which President Trump said that there is no deadline in his mind when it comes to the trade talk between US and China coming to an end.

The analysts have been critical of investors as well as Trump saying that investor behavior should no longer be influenced by anything that Trump tweets because there is a change in the optimism levels of Trump on a daily basis. They have also cited the lack of other points to talk about as the influence of trade talks on investors.

There are some who say that the comments of Trumps should not be seen as indications of the negotiations being in progress or not.

The employees in the private sector which were hired in the month of November were only 67,000 in number as per the statistics which came out on Wednesday.