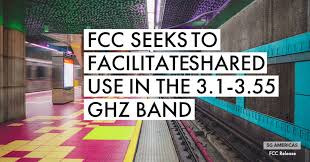 The FCC has announced that they are going to propose the changes to the rules which govern the band of 3.1-3.55 GHZ which is going to allow the commercial usage including the 5G network launch in the range.

3.5 GHz band has the potential to be the prime spectrum for the 5G services and this is going to mean that the capabilities of bringing the 5G internet to houses is going to expand and it is going to reach the businesses across the country too. The Commission already has scheduled an auction which is known as the Auction 105 for the opening up of bidding on the 25th of June, 2020

FCC in its announcement in the day has said that the demand for the mid-band spectrum for the services of broadband and in particular 5G has grown by quite a margin in the previous few years. The Congress had in the previous year passed the Mobile Now Act and this requires that the departs to make the new spectrum available for the usage by broadband and mobiles and the further requires the Commission to take an evaluation of whether the commercial services of wireless and the federal incumbents are able to share the use of the mid-band spectrum.

In congruence with the responsibilities of the Commission under the act, the FCC said that the notice today of the Proposed Rulemaking acts as an initial step towards the usage of spectrum in a shared manner between the federal operations and the usage of commercial services flexibly.

Amazon, Comcast and a few others have already been testing their wireless services in this range and the FCC is making their best attempt to speed its rollout quickly.