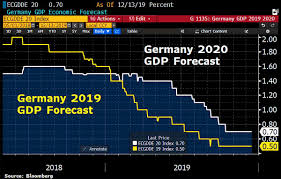 The economy of Germany has seen a growth of 0.6% in the year 2019 as per the statistics office of the country which is a huge slump in the levels of growth and the weakest the expansion has been since the year 2013.

The expansion in the GDP has been as per the views of all the economists who had been polled some time back. The complete year GDP figures have shown that a slowdown form the level of 1.5% growth which has been recorded in the year 2018 and the expansion of 2.2% seen in the economy of Germany in the year 2017.

The organization which published the statistics, Destatis has said that the performance in the service sector had been up but had been markedly down in this industry. The decline in the growth of economy is a part of the trend which has been seen in the recent years in the country and has been more severe with the trade tensions growing around the world which have hit the exports of goods.