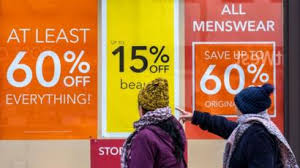 Retail sales bounce back in January after weak end to 2019

Retail sales have bounced back in January in Great Britain. A data released by the Office for National Statistics show that the amount of retail goods sold in the UK in January went up by 0.9% after being down for two consecutive months.

The report shows that the comeback was mainly done due to the stronger demand for the clothes and footwear. This was the largest increase in the retail sales since March last year. Experts believe that more growth was expected in the coming months.

According to Rhian Murphy who heads the retail sales at ONS told that the retail sales in Great Britain had fallen in the last three months prior to January and the amount of goods bought fell by 0.8%.

The turnaround was largely due to the increase in sales by the food retailers that saw a growth of 1.7%. Non-food sales increased by 1.3% during the month.

Head of retail and consumer goods at Lloyds Bank told that the current figures suggest that there is some positive consumer confidence but there is a caution approach in the minds of the customers as well. The sales during the Christmas period last year was also low and due to subdued consumer spending.

The fuel sector also saw a drop of 5.7% in January when compared to the price trend in December last year.

According to a research done by the British Retail Consortium the entire year of 2019 was one of the toughest for the retailers in the last 25 years. The retail sales across for the whole year dropped by 0.1% making it the worst year since 1995. But the research had excluded some of the fastest growing retailers like Amazon.

In the last couple of months the big names like Mothercare and Thomas Cook had to suffer major blows in their revenues and profits.